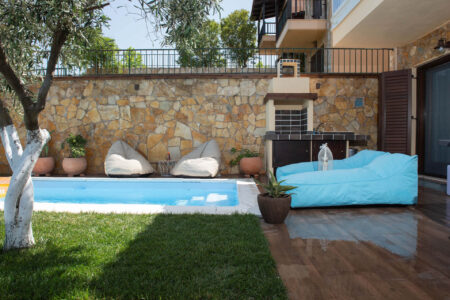 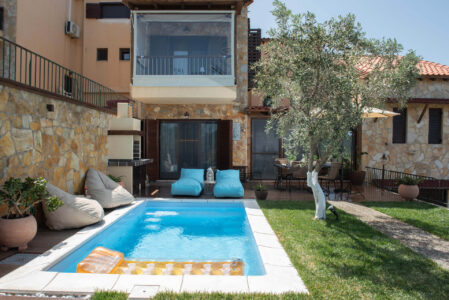 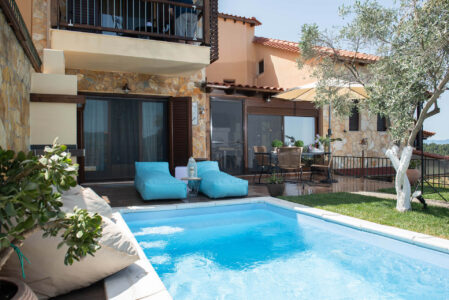 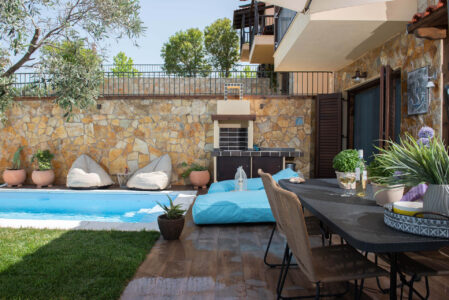 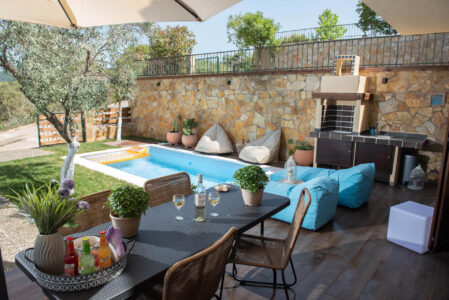 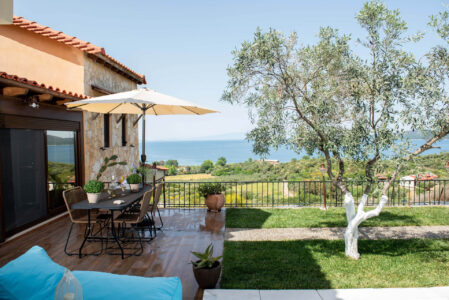 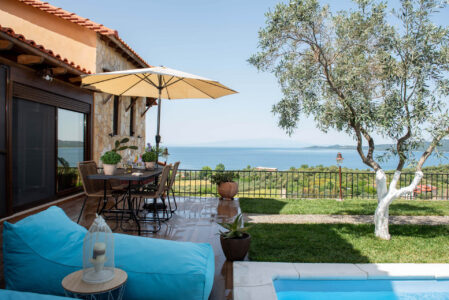 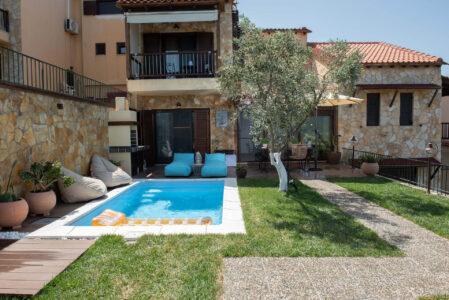 View of the settlement

Dandy on the Beach- Nea Roda | Private Villa With Pool, Parking and Cellar- Sea View is a three-storey holiday home with a private garden and swimming pool, with amazing views of the bay of Ierissos and Mount Athos. On the ground floor there is a living room and a fully equipped kitchen, as well as a patio with a dining area. On the first floor there is a bedroom with an xl double bed and a bathroom with shower. The bedroom has a balcony from which you can admire the wonderful view and enjoy your breakfast or coffee. In the attic room there is a built-in double bed, and a sofa, which can be converted into a double bed.
In the basement there is a wine cellar, with wines that guests can taste at an extra cost.
The house has a private parking space.

One of our partners will welcome you, give you the keys to the house and show you the utilities of the house. He/ She can also suggest activities and places to visit. Our presence is discreet. However, we are at your disposal at any time to discuss any matter that arises.

Dandy on the Beach- Nea Roda | Private Villa With Pool, Parking and Cellar- Sea View is a three-storey holiday home with a private garden and a swimming pool, fully equipped to offer all the comforts to its tenants. It is surrounded by the mountain forest area, but at the same time it is one breath away from the sea. The summer house has a unique view of the bay of Ierissos and Mount Athos, which can be enjoyed both from the garden and from the balcony of the upper floor. The house was built by us with special care for those who want to combine the tranquility and coolness of the forest environment with easy access to the sea. For those who want to relax and unwind while enjoying the sun in combination with the coolness of the private pool. For wine lovers who are given the opportunity to try the wines of our collection. Designed to be the ideal holiday choice, Dandy on the Beach- NeaRoda | Private Villa With Pool, Parking and Cellar- Sea View has only pleasure to offer.

NeaRoda is a seaside settlement, built at the northern part of the third peninsula of Khalkidhiki. It is located at the narrowest point of the Athos peninsula and is surrounded by the sea on both sides. It is located very close to Ierissos. It is a quiet picturesque village, with traditional houses, flower gardens, and crystal clear beaches with golden sand. In the port you will see excursion boats and sailing boats that make the daily tour of Mount Athos, as well as fishing boats, side by side.
NeaRoda is also known from history, as, in 480 BC, in this location, Xerxes, the ancient Persian king, opened a canal for his fleet to pass, wanting to avoid sailing around Mount Athos, as the last time he had attempted it, his fleet had sunk.
The view of Acanthus Gulf and Mount Athos, the easy access to the sea, as well as the history that is connected with the area constitute NeaRoda an ideal destination for summer and thematic holidays.
DISTANCES

We use cookies on our website to offer you the most relevant experience, we remember your preferences and the repeated visits. By clicking "Accept ", you accept the use of ALL cookies.
Cookie settings ACCEPT
Manage consent

This site uses cookies to improve your experience while browsing the site. <span class = "JLqJ4b ChMk0b" data-language-for-alternatives = "el" data-language-to-translate-into = "en" data-phrase-index = Of these, cookies that are categorized as necessary are stored in your browser, as they are necessary for the basic functions of the website. We also use third-party cookies to help us analyze and understand how you use this site. These cookies will only be stored in your browser with the consent or you. Έχετε also the option to opt out of these cookies. However, opting out of some of these cookies may affect your browsing experience.
Necessary Always Enabled
The necessary cookies are absolutely necessary for the proper operation of the website. This category only includes cookies that ensure basic features and security features of the site. These cookies do not store personal information.
Optional
Any cookies that may not be particularly necessary for the operation of the website and are used specifically for the collection of personal user data through details, ads, other embedded content are classified as unnecessary cookies. It is mandatory to secure the user's consent before executing these cookies on your website.
SAVE & ACCEPT
Menu 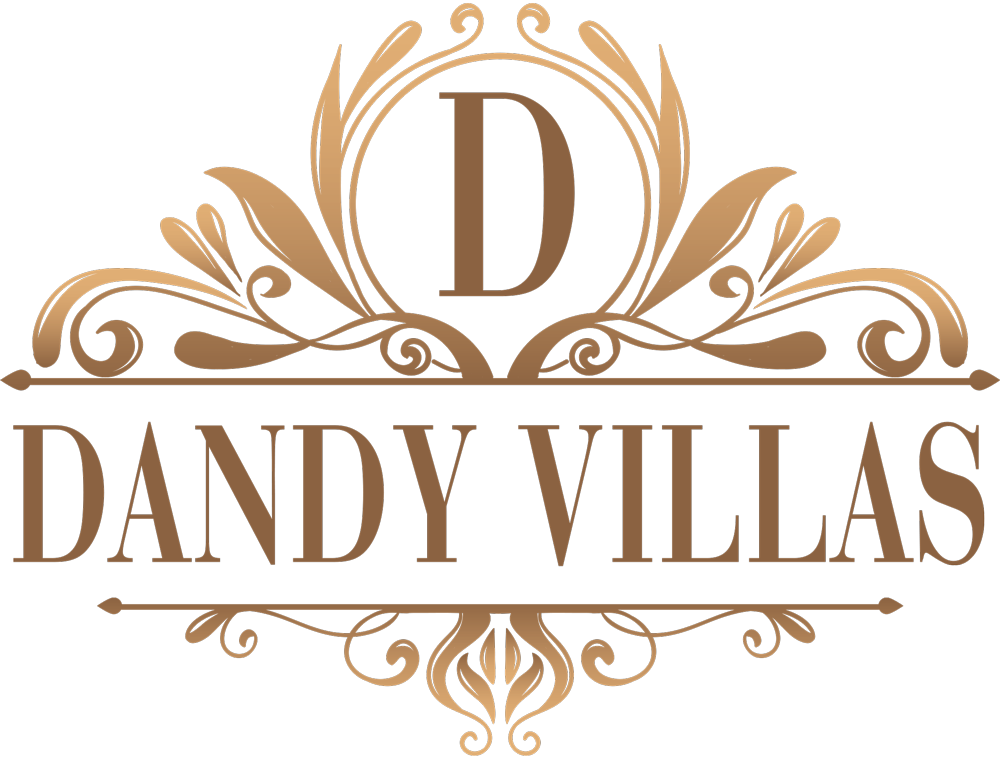